Questions about if a certain Wifi adapter is compatible with the Aircrack-ng suite or what Wifi card is capable of packet injection and operating monitoring mode are commonly asked at discussion boards and social media. A Wifi adapter that is capable of packet injection and monitoring mode is trivial and important functionality to be successful in Wifi hacking. Wireless packet injection is spoofing packets on a network to appear as if they are part of the regular network communication stream. Packet injection allows to intercept, disrupt and manipulate network communication. An example of this is sending a deauthentication message from an unknown party outside the network to a connected client as if it was send by the wireless router. This will result in the client disconnecting from the router. Monitoring mode is one of the six modes a Wifi card can operate in which allows you to capture network packets without having to associate with the access point.

If you are looking to buy a Wifi card which is capable of packet injection using the Aircrack-NG suite you can have a look at the following list with supported Wifi adapters:

Performing an Wifi adapter packet injection test to see whether your Wifi adapter is capable of injection can be done easily with Aireplay-ng. Aireplay-ng is great tool to generate traffic for cracking WEP and WPA keys. Another great feature is the Deauthentication option which we have used a lot through the Wifi hacking tutorials like:

First we need to put the Wifi adapter in Monitoring mode using the following command:

For anyone getting errors in Kali Linux 2.0: read this post 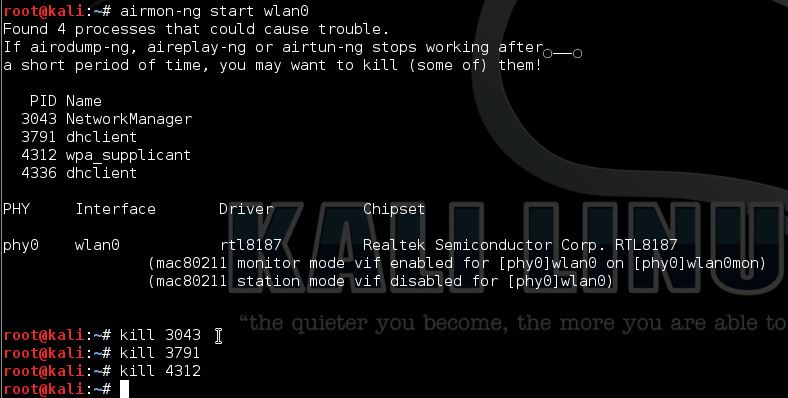 Testing if your Wifi adapter support packet injection can be done using the following command:

Packet Injection is working for this card!

In Kali Linux ‘iwconfig’ will show you the operating mode of your Wifi card: