In this tutorial we will be hacking Unreal IRCd service on Metasploitable 2. We will learn how to perform enumeration on network services and how to define and retrieve crucial information. Then we will be looking at how to perform code analysis and modify payloads using msfvenom before we execute the exploit. In order to retrieve more information about the Unreal IRCd service we need to connect to the IRC channel using an IRC client. We will start with installing the HexChat IRC client and connect to the IRC channel to see if we can get more information about this service. Such as the version number for example which could not be retrieved with Nmap. When we know which version of Unreal IRCd we are dealing with, we can continue with performing a vulnerability assessment. Then we will be exploiting the found vulnerabilities both manual and by using the Metasploit framework.

From the Metasploitable enumeration tutorial we got the following information from Nmap:

Connecting to the IRC Server with HexChat

Let’s start with connecting to the IRCd service and see if we can find more detailed information about this service. For instance a version number. If you don’t have an IRC client installed on your Kali Linux you can install Hexchat by using the following command: 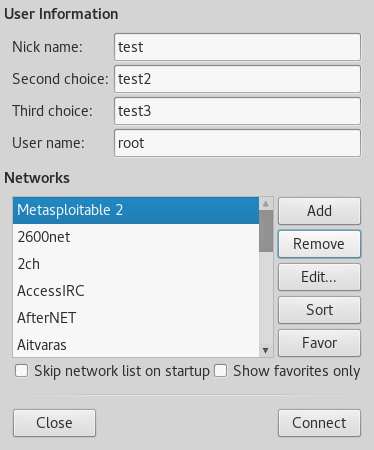 Click on the add button to add a new network and name it Metasploitable 2.

Next click on the Edit button and enter the Metasploitable 2 IP address for the new network and use port 6667 as following: 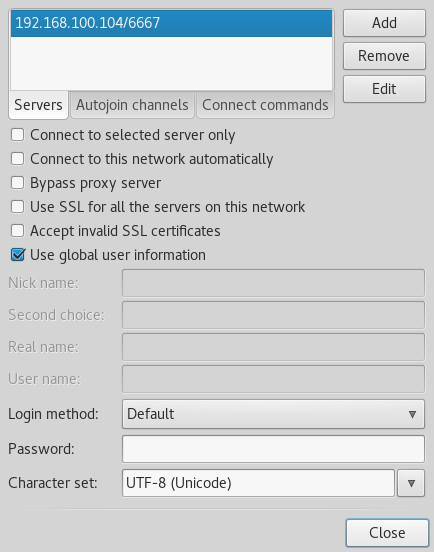 Before we will be hacking Unreal IRCd we need to check this version of Unreal IRCD for vulnerabilities using searchsploit on Kali Linux and exploit-db.

A few direct hits from searchsploit.

As we already expected there are 3 direct hits for this version of Unreal IRCd:

We have also searched exploit-db for Unreal IRCD 3.2.8.1 and got the same results:

We will be exploiting the Unreal IRCd service in this hacking tutorial using the Perl script and the Metasploit module. Let’s start with the Perl script.

In the next steps we will be exploiting the Unreal IRCd service using the Perl exploit we’ve found with searchsploit and Exploit-db.

Before we launch any scripts and exploits we need to analyse the code and see what it exactly does. Let’s start with the first part of the script which contains the different payloads.

Use the following command to print the script contents to the console:

Let’s have a look at the different payloads in this script:

The first three lines set the value of 3 variables named host, port and type to nothing. Then they are assigned with the values from the first three arguments; the host, the port and the type. The 3 lines to follow test the 3 variables for null values and execute the usage function when a null value is found on 1 of the variables. This will exit script execution since the usage function ends with exit(1). In the usage instructions we can see that 5 different types can be used to launch this exploit. The type numbers correspond with the 5 payloads we’ve been looking at before.

When we look at the options carefully we can see that type 2 and 3 have been switched in the code:

In the next code block we can see that the selected type number matches the payload number on execution. Type 1 executes payload 1, type 2 executes payload 2 etc. Very strange but a great example teaching us why we need to analyse the (source)code before compiling and launching exploits. 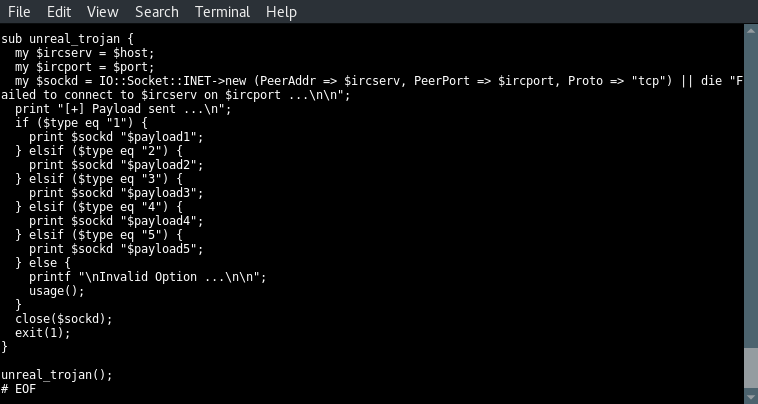 Since we have no control over the downloaded file and we do not know the contents of this file, we will modify the exploit to get control over the payloads. We will be performing the following steps:

One major downside of the current Perl script is that it depends on wget for successful exploit execution. The exploit would fail if wget is not present on the target host. This is often not the case but we will be removing this dependency by initiating a Perl reverse shell directly from the command line instead of a file.

Use the following command to generate a Perl payload using msfvenom:

We can test the payload by issuing the msfvenom output to the command line and open a netcat listener on our attack box:

Execute Perl from the command line

And receive shell on the netcat listener:

Reverse shell is working from and to the attack box.

You can see that we got a connection from our own attack box to the attack box since the connect to and from IP addresses are exactly the same. Let’s proceed with editing the original Perl exploit and replace the payload by our own payload we have just generated with msfvenom.

Now we know that the reverse shell payload from msfvenom is working we can copy the Perl exploit script to our desktop with the following command:

Then open the Perl script and modify payload 1 as following:

Replace all commands except AB; with our own payload.

NOTE: Be sure to escape the single quote signs containing the Perl reverse shell code with a backslash. Also remove the other payloads in order to avoid mistakes with unwanted consequences.

Now that our exploit has been modified and we know what gets executed, it is time to launch our exploit on Metasploitable 2. First we need to setup a netcat listener using the following command:

The next step is to run the exploit using the following command:

Then we receive a reverse shell on our netcat listener:

Root shell on Metasploitable 2 by exploiting the backdoor in Unreal IRCd 3.2.8.1

Now we will be exploiting this backdoor in Unreal IRCD using Metasploit. Let’s fire up msfconsole and search for the correct module using the following command:

We will be using the unreal_ircd_3281_backdoor exploit.

Now type the following command to use the correct module:

Next we look for a compatible payload and select one using the set payload command:

Now type show options to see what fields we need to modify and set the correct values: 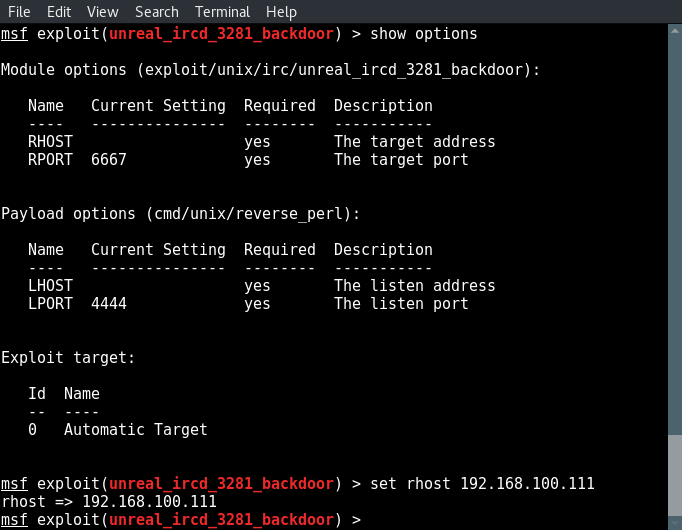 And type run to execute the exploit:

And there we got a root shell on Metasploitable 2 using the backdoor in Unreal IRCD.

The lessons learned in this hacking Unreal IRCd tutorial is:

At the start of this tutorial we knew there was an IRC service running on multiple ports from the Nmap scan. We did not know what version of Unreal IRCd was running because the Nmap scans did not mention that. Connecting to a service to extract more information is a crucial part of the service enumeration process. The version number appeared to be the missing puzzle piece in order to perform effective and efficient vulnerability analysis. Eventually we got the version number by connecting to the Unreal IRC service with an IRC client.

In this particular example there are only a few Unreal IRCd exploits available which apply to only 2 versions of Unreal IRCd. One of them is a DOS exploit for Windows which we have ignored in this tutorial thus leaving us with 2 remaining options. We could have tested them quickly to see if the service was vulnerable. Instead we chose to retrieve the version number and launch an exploit from which we know it has a high success rate because of the direct match with the version number. It is very recommended to work this way and be more precise when it comes to launching exploits. You want to choose your exploits to launch carefully because they may crash a service, generate unnecessary traffic or change the target’s state in another way. Also when you are facing more common software with a lot of vulnerabilities for many versions, working effective and efficient becomes more important. The trial and error method will increase the risk of crashing a service and consume a lot more time than necessary.

Analyse code before executing it

Last but not least, never ever trust payloads you cannot verify or test. In this tutorial we’ve encountered a Trojan downloader as payload. We have no control over the contents delivered by the source and therefore we have replaced the payload by our own payload.

Thank you for reading this hacking tutorial and do not hesitate to ask questions using the comment functionality below. Liked the tutorial? Please share it.